Paper disks, magnetic disks, silicon layers: the data carrier has a varied history. However, all storage media have faced a common issue.

The storage of data has occupied humankind since it first started recording information. But let’s forget prehistoric times for now and jump straight to the digital age. Let’s head back to the 1960s, when mainframe computers were just starting to be established.

Early beginnings: from the punch card to magnetic data storage

A computer without a screen is impossible to imagine today. But in the early days, punch cards served as storage media and the readout followed directly via a dot-matrix printer.

Read this study on cloud use in the Swiss market to discover what challenges hybrid ICT operations bring and which cloud models and services – for example, backup – Swiss companies prefer. Find out which new technologies of the digital transformation (blockchain, IoT, etc.) companies are implementing via cloud platforms.

This was not only laborious, but also slow. In the 1960s, magnetic storage methods emerged. Tapes on big reels stored the programs for electronic data processing. Backups were still barely even an issue, as the first computers were purely calculating machines that still did not allow automatic data backup.

In the 1970s, storage devices diversified. In 1972, IBM introduced a flat, re-writeable magnetic disk with an 8 inch diameter. The floppy disk was born – ok, the first one appeared in 1969, but it was read-only. 80 KB could be stored on one floppy disk. The title image of this article alone – around 240 KB – would have required three floppy disks. Even so, the first floppy disk offered a thousand times more storage capacity than a punch card.

The triumph of the floppy disk

Technology began to shrink in size in the 1970s – but increased in capacity at the same time. When the first personal computers emerged towards the end of the decade, they used floppy disks in the comparatively manageable 5.25 inch format. Incredibly, the HD (high density) versions of these data carriers stored 1.2 MB of data. So, our title image would now have fit four times on one disk.

Floppy disks evolved well into the 1980s, not only becoming the standard data carrier for operating systems, programs and data, but also serving as backup media for the PC. In contrast, magnetic tape was still used for mainframe computers.

Towards the end of the 1980s, floppy disks, now in a 3.5 inch format, reached the peak of their storage capacity. They offered almost 1.5 MB of space, so around six times the size of the title image of this article.

During the course of the 1980s, magnetic tapes moved from the data centre and into the office. Tape quickly gained in popularity as a convenient backup media for servers on a local network. One tape per day and the data on the server was saved. This backup medium was also confirmed as having a particular longevity, making it an attractive option for archiving data – which it still is today. Current LTO-8 tape drives store 12 TB, with data compression enabling more to be saved onto each tape.

The hard disk rapidly superseded the floppy disk. The benefits were overwhelming: hard disks are quick to read from and write to, offer lots of storage capacity and are suitable for all standard backup strategies. And with capacities of up to 12 TB on current magnetic storage devices, saving a small file like our title image is no problem whatsoever.

External hard disks are ideal for backing up small volumes of data, as the device can be disconnected from the computer afterwards and tucked away in a cupboard. However, external hard disks and RAID (Redundant Array of Independent Disks) systems that also mirror data have crucial disadvantages. Generally speaking, they are not kept at a separate location, away from the computers. There is therefore a risk of data loss, such as in the event of fire, water damage or theft. Ransomware can also encrypt connected hard disks and make the backup unusable.

NAS: the hard disk moves onto the network

Using NAS (network attached storage), a storage device on the local network, enables backup procedures to be automated, as it is available all the time and does not need to be connected manually. This is convenient, but does not outweigh the disadvantages of external hard disks, as it is still not at a separate location. And NAS is also easy prey for ransomware.

As storage capacities have increased, so have data volumes. When Windows 3.0 appeared in 1990, seven floppy disks sufficed. In contrast, a copy of Windows 10 is around 5 GB. This would require around 3,500 floppy disks. And data, such as for applications, is now moving from the local network to the cloud.

This diversification has changed backup requirements. If the server is running in the cloud anyway, then it makes no sense to have the backup in the office. The other way round, however, makes complete sense. Backing up to the cloud offers various advantages: the backup takes place automatically, data is held in a separate location and is protected from fire and from threats such as ransomware. And the cloud service provider takes care of replacing any defective hard disks. If the backup requires additional space, this can also be rented quite easily.

But as companies using cloud services are handing over control of data, having trust in the cloud provider is essential. Secure, encrypted access and an appropriate privacy policy form the basis for this trust. Not only does the cloud provide fully-automated backups that can be accessed at any time – nowhere else is data as secure as in the cloud. This is particularly the case if the data centres are located in Switzerland and are certified as having the highest security level (Tier IV). And so an elegant solution is found for the ongoing issue faced throughout the history of storage media: the long-term storage or backup of data. 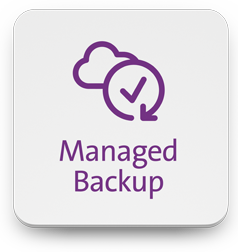 Swisscom Managed Backup frees companies from the effort of managing backups and recovery. The service includes backup of mailboxes (Microsoft Office 365) as well as physical and virtual servers. Backups are created automatically every day. The data is stored in the secure Swisscom Cloud, in Swiss-based data centres. In the event of data loss, the KMU help desk will assist with quick, secure data recovery.