Column: What 5G Innovations Manager Matthias Jungen hopes to get from the 5G network, both on and off the slopes.

I feel I have a strong connection with Lenk. I spend nearly all my weekends there in winter, skiing, snowboarding, cross-country skiing and curling. I also support the Snowboard Cross Europa Cup in Lenk as a helper. While the competition is on, I still always find time to watch some of the races live.

It’s just spectacular what the snowboarders do, how bravely they ride the carved out slopes and battle for every millimetre to take the lead. It only takes one small catch of an edge and the snowboarder skids off the slope and falls. But as a spectator I might not see this section of the race, as I only catch a quick glimpse of the riders as they disappear behind the next hill.

Livestreaming in real time and without any delay in transmission

I would like to see the race live from start to finish. On my mobile phone, for example, if I can’t see the athletes directly. However, I know that competitions for minority sports like snowboard cross are of little interest to the media. As a result, TV channels don’t bother with live broadcasts of such events. Using traditional technology, it is too expensive. I’m just imagining how much cable would have to be laid for the cameras!

But with a 5G network it would be much simpler. Wireless cameras positioned along the slope could transfer the large data volumes for live images to the studio without any delay in transmission. Then I, and lots of other spectators, could follow the race live on a 5G mobile phone. Of course, we would then have to take care not to miss the live moments on location. Maybe my mobile phone could vibrate at that point, so I would know to watch the actual slope.

Augmented reality glasses mix real images with digital information. They thereby extend visible reality. A 5G network, with its low transmission delay (low latency), is ideal for transferring (streaming) the digital information to the glasses or a smartphone practically in real time.

Compete with the best, thanks to augmented reality

And taking things just a step further – it would be great if I could measure myself on the course against the winner! Before the start, I don’t just prepare myself mentally for the race, but also technologically. I put on my AR glasses, which already have the winner’s race data stored on them. Sensors, which are sewn into the snowboard crosser’s clothing, have recorded every movement and transferred them via the 5G network.

As I ride down the slope, I see the virtual image of the winner in my AR glasses and how they master the course. That way, I can experience at first hand just how good the snowboarders are, all of whom have crossed the finishing line light years ahead of me. And I would quickly realise that I could barely keep up with them, even in a virtual world.

Even so, I am looking forward to the next generation network, which will allow us to do things which are still inconceivable today! 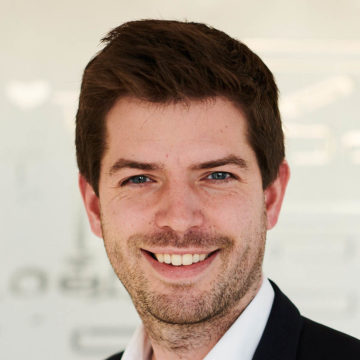 Matthias Jungen is a 5G Innovation Manager at Swisscom. The economist is convinced of the possibilities of technology: ‘I believe in augmented reality, in autonomous robots and vehicles, in intelligent assistants – and that we have no idea what the future will bring.’

Swisscom plans to offer 5G throughout Switzerland by the end of the year in cities, the countryside and mountain regions. You can see which areas currently have 5G coverage at www.swisscom.ch/5G.

The increased speed, huge bandwidth, short response time, energy efficiency and capacity make 5G a key technology in many areas of application. It will make things possible that we can’t even imagine yet. Look forward to the future with us.

Back up photos from your smartphone automatically, access your data from anywhere and enjoy your holiday photos as a slide show on your TV –…

Column: What 5G Innovation Manager Matthias Jungen hopes to get from the 5G network on and off the roads.Somehow, among my group of friends, we…

Column: What 5G Innovation Manager Matthias Jungen hopes to get from the 5G network on and around the farm.When I’m making a delicious meal, I…

Is high-tech really the way to make our cities smarter and organise our future co-existence? Or should we draw inspiration from nature; for instance, from…