For two months, the Apelab startup presented its products at the first Startup Zone to be opened at the Swisscom Shop in Zug, where customers were able to try their latest virtual reality game, “Break a leg”. Maria Beltran, Apelab CDO and co-founder, talks about her experience in the Startup Zone, the Swiss game design scene and Apelab’s future plans.

You moved out of the Startup Zone in the Swisscom Shop at the end of November. How was the experience?

For us it was a good experience. I visited the Startup Zone on the opening day and it was great. I liked being able to show our products directly to the audience, although we weren’t at the shop for very long: virtual reality is something new and customers need to get used to it. But I guess it is very important to give them the chance to try VR experiences, sometimes for the first time. We have been to a lot of events, where we have presented what we have been working on to the public. Therefore, presenting a market-ready product at the Startup Zone was a new thing for us. It is more tangible for people since they are able to interact with the headset and the controller. We also realised that presenting our products in a shop helps the customers understand that they can actually buy them. We also reached a different, very valuable audience for us, since the product was easy to access: everyone could visit and have a look at it in the shop.

Are you satisfied with the sales of your latest game “Break a Leg” so far?

We launched a free version of our game “Break a Leg” first and that went pretty well. We had a lot of downloads and all the reviews were very good. A premium application is always more challenging to sell because it’s such a young market and not everyone has a headset yet. I guess it’s still very early for the market. Anyway, we are happy with the number of downloads so far. It’s a nice reward for all the hard work we put into it.

How would you describe the virtual reality scene in Switzerland from a game designer’s perspective?

Although Switzerland is a small country and there are only a few people working in the virtual reality game market, we are always present at all the big international events. I guess we stand out because of the originality and quality of our content. We are a long way behind countries like China in terms of production quantity – China is a very big market for VR games. But our content is of a very different kind and if we keep on producing this high quality, we can maintain our reputation internationally. And now that public funds and television are starting to realise that virtual and augmented reality is indeed a new market with a lot of possibilities, the chances for the design scene in Switzerland are growing. 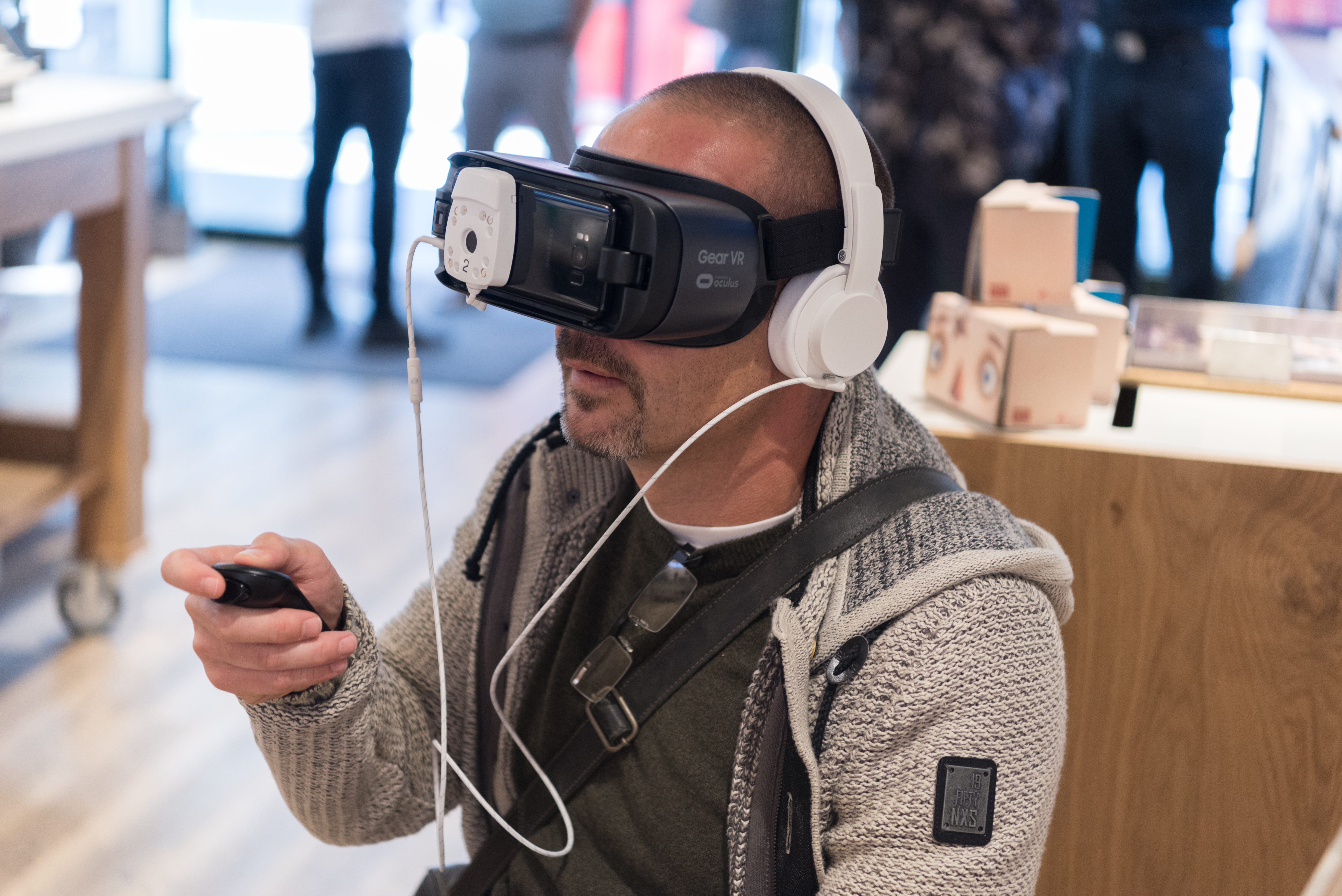 Right now, we are focusing on tools that can build up VR experiences, which will be our next big move. For the last four years, we have been producing content, but at the same time we have been developing a framework called SpatialStories to speed up production, primarily for our own use. As we are mostly designers at Apelab, it had to be an application that was easy to use. We realised that there is a huge demand for such tools, especially when demand for content increased suddenly, which is why we have started to distribute our production system to other developers. Our software helps people to actually develop virtual and augmented reality without having to code. It’s a way of democratising VR/AR production. At the moment, we are working on a new application called Studio, a standalone version that will make VR or AR production ten times faster and easier than before. The launch of the Beta version is planned for the first quarter of 2018. It will hopefully become a new standard for easier production.

About the Swisscom Startup Zone

The first Startup Zone was opened in the Swisscom Shop in Zug at the beginning of October. This pilot project enables selected start-ups to present their latest products for a limited period of time. Startups can use this public exposure to raise awareness of their products and gather valuable customer feedback.

Apelab is a Virtual Reality studio based in Geneva and Los Angeles, founded in 2014. After Sequenced, an award-winning interactive animated series, and Watch Out, a casual VR game adapted from the Oscar-nominated movie My life as a Zucchini, the transdisciplinary team recently released Break a Leg, a VR game inspired by the 19th century magic show that has already been named Best Mobile Innovation by VRCORE (China). Apelab was one of the first companies to be selected last year to join Dart17 , a test laboratory in San Francisco where creatives can experiment and scale their projects.

How do Swiss start-ups assert themselves in the technology heartland of Silicon Valley? Advice from three people who know: an investor, a senior manager in…

The five winners of the Swisscom StartUp Challenge 2019 are back from Silicon Valley. In our highlight video, they discuss their experiences and what they…